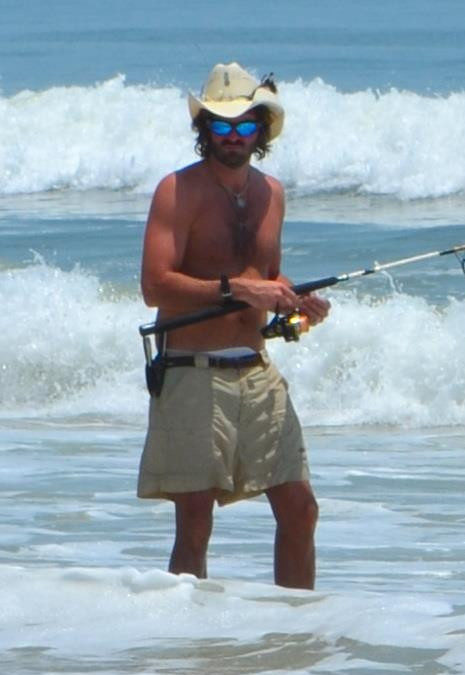 It’s true. The legend of Troy “Clint” Bodean started with a real person. The man I’ve come to know so well through 8 full-length novels, a couple of short stories, and a novella were born on a fateful trip to Pawleys Island.

In 2012, Tropical Storm Debbie put a rainy damper on our annual summer trip to the arrogantly shabby vacation island. We spent much of the trip exclaiming, “Damn you, Debbie!” and playing cards at the dining room table. But something amazing happened when we got bored with the card games… we started spying on the neighbors. And it just so happened that there was a man… a man whose time to be the main character in a fun, thriller type novel had arrived. Troy.

Or at least that’s what we imagined that his name was… you see, we named all of the colorful neighbors and gave them a silly back story. There was Troy “Body” Bodean (yes, he was originally going to go by Body—whew, glad I changed that), 6’1″, ruddy tan, always shirtless, a little less than shoulder length hair, khaki shorts with a black belt, Costa sunglasses, and a hat… THE hat. A straw cowboy hat with some sort of feather on the front.

There were others, Clint, Mama Troy, Troy Jr., etc… you get the idea. But the spark of what Troy symbolized stayed with me. He just HAD to be immortalized in a book. What would I call that book? Members of our family began referring to this novel as Troy’s Crick, but as the plot began to take shape, I realized that the Hat had almost become a main character and a central plot device, so, I had many titles, One Trick Hat, Hat Trick, The Hat, The Gone Hat, Life of Hat, etc. But eventually, I settled on Hat Check. When you read the novel, you’ll see why. It may be silly, but the first thing I do when writing a novel, is choose an actor who will become my character sketch. This is the real “Troy” photographed surreptitiously by one of my family members who will remain nameless.

Not a bad casting job if I do say so myself. And I fill in a collage with actors as I add new characters to the novel to keep everything straight. So, there you have it. The real, live Troy “Clint” Bodean. (If you know him—or are him—thanks for everything.)

Catch you next time.

No comments to show.